What is a Sunchoke? 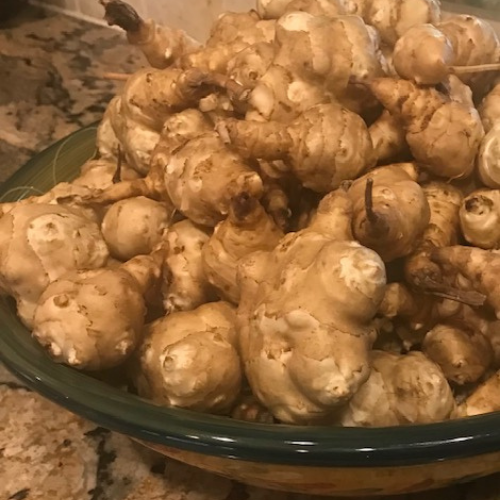 If you’ve visited any farmers’ market in the fall, perhaps you came across these odd, knobby vegetables that slightly resemble ginger. Presumably, baffled by their appearance and with an uncertainty of how to cook with them, it’s possible you overlooked them in favor of another fresh find. Can I let you in on a little secret? In that moment, you missed out on scooping up one of the most versatile root veggies that’s available to us: sunchokes, also known as Jerusalem Artichokes.

It’s okay. Most people have never eaten a sunchoke and are unsure of what to do with them. Despite their strange tubular shape, sunchokes are equally as delicious raw as they are roasted.

They’re a root vegetable from the sunflower family, tubular-shaped and in season from late fall through early spring.  I look forward to the beginning of November when I can dig these up from my garden!! They just keep coming back each and every year with minimal effort! The above is a picture of MY sunchokes! Woo hoo!

Sunchokes have a tough white skin and starchy-tasting inside. If anything, sunchokes can be accurately compared to potatoes, both in how they’re grown underground and their earthy flavor.  Even though they’re also known as Jerusalem artichokes, they have no origins in Jerusalem and they don’t taste like artichokes!

But, they’re superstars when it comes to intestinal health. These little roots are packed with inulin, a non-digestible dietary fiber with strong prebiotic properties, which also helps to keep blood and glucose levels stable. Not to mention, they’re also low-calorie, fiber-rich, and a great source of iron, calcium, magnesium, and potassium.

Before I divulge all the delicious ways you can put sunchokes to good use, I should warn you that they have another interesting nickname. They’re also known as ‘fartichokes’ LOL.  And I’ll leave it up to you to make the decision on whether the sunchoke’s gassy effects are worth the risk.

Now that we’re in peak sunchoke season, here’s what you need to know about the veggie and how you can add it to your meals for a sweet, completely nutty and crunchy bite.

Certain vegetables lend themselves to be prepared in a multitude of ways to bring out all their unique flavors, and sunchokes are one of them. Like potatoes or cauliflower, sunchokes can be roasted, fried, boiled, steamed, grilled, pickled, mashed, smashed, and twice-baked – WOW!

Here are my favorites:

No matter how you try them, sunchokes are an incredibly versatile way to introduce a new root vegetable and side dish into your family’s mealtime repertoire.

Let me know if you get to try them!

Want to jumpstart your health in just 5 days? Download my free guide now!